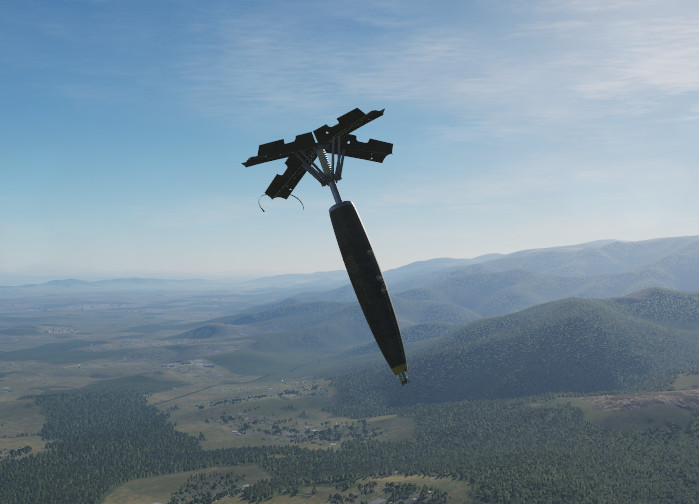 Most of the controls related to ground attack and ordnance delivery are held in the Armament Panel. This part of the Radar Intercept Officer cockpit is located near the left knee of the NFO. As usual I am not going too much into the details of what is clearly explained in the manual; I will rather add some considerations and tips.

The top-right knob selects the Attack Mode. There are five options available but the most commonly used are Computer Target and Computer Pilot. The other options are the backup Manual mode, the not yet implemented D/L Bomb mode and the Computer Pilot mode.

Computer Target and Computer Pilot are similar to the more commonly known CCRP and CCIP. How do you remember which one is what?
CCRP → Computer TARGET → R=Release;
CCIP → Computer PILOT → I=Impact
I get it, it’s not a fancy way to remember it but it’s easy and it works 😉

Both modes provide a reference for ordnance delivery to the pilot and, as the acronyms suggest, the former shows a cue that guides the pilot to the point where he will release the ordnance (the AWG-9 is used to calculate distances so turn it on); the latter shows where the bomb should impact the ground. Details of these two methods can be found in the manual. 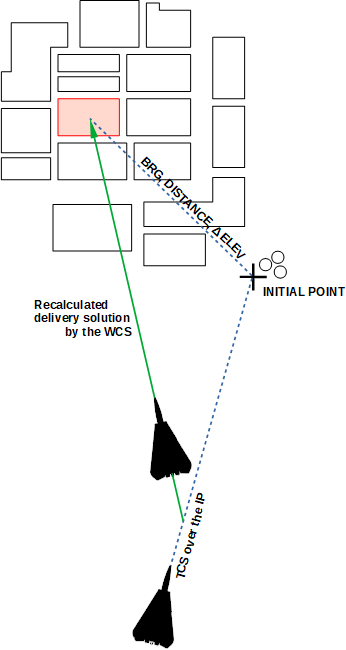 This mode is not used as commonly as Pilot and Target modes.
The IP Mode procedure is quite simple: the RIO inputs an IP waypoint then the WCS is fed with distance, bearing and ΔElevation relative to the target. When the pilot has visual of the IP location he moves the Target Designator over the IP itself (therefore it is important that the IP is something easily recognizable) and the WCS recalculates the release point according to the provided data.
This mode is useful in a number of occasions; it also fulfils 5 out of the 9 lines of the 9-line CAS Brief:

On the other hand this delivery method is quite imprecise and depends very much on the accuracy of the offset data provided. I can see this method working in a pre-LANTIRN scenario when precision bombing wasn’t really a thing yet or to hit big targets and prevent or make the talk-on easier. For instance attacking a specific building in an urban zone with dumb bombs. DCS-wise, it’s usually much easier to simply get the latlong coordinates of the target and, if necessary, adjust by talking-on the F-14 crew.
These are the steps to set up an IP Mode attack:

The rest is in the hands of the pilot (i.e. moving the target designator over the position of the IP and set up the attack run).
Note: at the moment IP mode appears to be bugged in MP. In SP instead works properly.

The so-called “dumb” bombs (also called iron or free-fall bombs) are conventional unguided bombs with no guidance system. In other words, they use the good old gravity to reach the surface following a ballistic trajectory.
The lack of guidance makes them less precise than their guided brethren but they are also much, much cheaper. According to Wikipedia, a Mk-82 bomb costs $2,082.50 whereas a GBU-12 (an updated Mk-82 fitted with a laser seeker) costs $21,896.

Fuze settings define how a bomb triggers. Every bomb in DCS is assumed to have both mechanical and electrical fuze so both must be set. The Mechanical fuze must be set correctly depending on the ordnance and allows for some interesting tricks. The options available are Nose and Nose/Tail (Tail is availble on certain DCS modules but not on the F-14). The F-14 Manual reports the correct settings for different bombs; these are some of the most common:

As you can see, since the retarded bombs can behave as the conventional non-retarded ones, mounting them instead of the plain Mk-82 is a better option in order to increase flexibility.

The Electrical Fuze is usually set as Instantaneous (INST) for general usage but other options are supported. For instance, the following is the delivery of a standard Mk-82 with two different fuze options set: on the left the INST fuze, on the right two subsequent shots of the DLY2 fuze. In the first case the bomb explodes as soon as it hits the ground, in the second the bomb hits the ground but it detonates a split second later.


Delayed Fuzes are not commonly used in DCS but can be useful when the target must be penetrated before the detonation, such as in case of bunkers. The INST fuze instead would detonate the bomb on the top of the bunker with minimal or reduced effects on the target.

You must have noticed that Mk-81, Mk-82 and Mk-83 have both L and H versions in the Weapons Wheel in the top-left corner of the Weapons panel. These settings tell the WCS if the version of the bomb loaded is either Low-drag or High-drag. For instance, Mk-82 and Mk-82 SnakeEye are High-drags whereas the “plain” Mk-82 is a Low-drag.
If you intend to use Mk-82 SE as non-retarded bombs, remember to change the setting from “Mk-82 H” to “Mk-82 L” otherwise the impact or release point will be incorrectly calculated.

Have you wondered how to calculate the distance of a ripple run depending on the interval and other parameters? The principle is easy and it’s fairly simple math since free-falling bombs follow a ballistic trajectory. To calculate the spacing in feet, in real life this formula is used:

The Spacing Factor is a constant contained in a number of tables calculated depending on parameters such as ordnance type, speed, flight path angle, release altitude, and so on. As you can guess, the number of tables is quite large but it is still better than having the RIO calculating ballistic trajectories in the middle of an attack run..

NOTE: some military manuals (FM, JP, NAVAIR, etc.) may be free for public release or may be not. The fact that these manuals are easily downloadable by a simple query on google doesn’t mean that they are free to distribute.

These two settings originate four possible combinations (2²=4) and the effects are very well explained in the manual so I will simply copy-paste it.

As we have seen, setting up the Armament Panel for the delivery of dumb bombs is quit easy. As RIO I usually ask the pilot what ordnance he prefers to drop (in case of non-homogeneous payload), how he wants to drop the ordnance (CCIP or CCRP – many pilots have no idea of what Computer Pilot and Computer Target mean), how many ordnance per pickle and the usual Single/Pairs, Step/Ripple configuration.
Then I create a WP near the target area or an IP nearby if I haven’t done it yet. If the target is an airfield I check the Aerodrome Charts to determine the best ingress and egress options consistently with the orientation of the target.
I usually leave the stations unselected until we reach the IP to avoid “involuntary delivery of ordnance on the random stuff we are flying over” (yep, it happened with an overexcited pilot).
Before entering the hostile area I double check all the settings and give full control to the pilot while I focus on spotting enemy fire or SAMs.

The most common errors I saw during the attack run are:

Next stop, LANTIRN and GBUs.