The topics presented in this and the next part of the Intercept Geometry study are hardly applicable to DCS directly. However, they all have something to teach or show, such as a different approach to a scenario, how different concepts and agencies are linked together or provide a quick look at how to deal with a non-cooperative target.

In some cases, the similarities with the procedures used 20 years later are very noticeable.

Usually, the intercept starts from the Bullseye call from the Controller: it can be vague (e.g. cardinal point from the Bullseye) or precise (e.g. magnetic bearing from the Bullseye). No matter the level of detail, it should be enough for the fighter to point its sensors towards the indicated area and spot the bogey.
Post commit, the true correlation comes when the fighter acquires and gives contact call with precise digital Bullseye or BRA format. If satisfied, the Controller can then provide declaration information.
In real life, especially as we move backwards in terms of technology and procedures, this is not always the case and the information provided may be incomplete. The “Unknown Procedures” cover how to perform an intercept when the BH is unknown (due jamming and electronic countermeasures, for example).

The procedures discussed in this section are an extract of the complete discussion. The goal is showing “something different” we can find inspiration from. The procedure is therefore summarized briefly, but both examples feature in the P-825/02 are reported in their integrity.

The documentation describes the procedures as:

By the end of this short discussion you will probably agree with this definition!

The principles on which the procedures are based on are:

Example I: No radar contact for Initial / Secondary Corrections

These charts are reported “as they are” and provide another means to visualize the procedure. Again, the purpose of this discussion is not learning to apply these procedures, rather understand how they work and which concepts are involved, to expand our understanding of the air combat in unusual and complex situations.

What can we take away from this very brief mention of the Unknown Procedures? Besides the “how cool is this” (or how boring, but if that’s the case, what are doing on this website? 😛 ), there are a few interesting points worth mentioning:

Notes
Due to the length of this article I split this chapter in two sections (the documentation splits this chapter similarly). The first part covers the why and how; the second is very brief and mentions the case of a heading jinking bandit.

The Fleet Conversion procedures have been already discusses in some form in the previous parts of this series, so I will mention only some parts of them.

Let’s start by the definition of “conversion“:

The conversion is a long-range (30 nm) set-up where the bogey is taken off collision in order to manipulate the given TA.

Previously the goal was different, namely to place the bandit on a Collision Course to decrease range whilst maintaining the TA. These procedures instead allow the fighter to optimize the Target Aspect or the Lateral Separation for a particular situation.

The documentation provides a list of circumstances where TA or LS displacements are appropriate. The following is the complete list as it gives a good idea of the purpose of the Conversion procedures:

This list immediately raises some interesting points. For example:

The AIM-7 Sparrow has the highest PK from Head-On (0° TA), which also allows for maximum range of the FOX-1. Moreover, no Lead turn is required but the lack of Lateral Separation along other factors may leave the fighter in a vulnerable position.

When the TA is between 30° and 60°, the Lateral Separation is sufficient to enable a more effective Sidewinder reattack, but the PK of the AIM-7 is much lower.
Besides this aspect, other disadvantages can be noted:

These considerations mean that, in a real-world situation:

[…] the fighter will most likely seek a low target aspect situation rather than accept whatever initial TA is presented. The knowledge of how to manipulate TA gives the fighter a flexible gameplan […]

The ability of visualizing the position of the fighter relative to the BFP is a fundamental skill to achieve a successful conversion intercept. The following sketch shows how the spatial picture may be visualized.
The BFP is paralleled by an LS line representing the goal LS at lead. The bandit is pictured with a line radiating outwards representing the goal TA ( → the desired amount of TA at lead). The resulting representation can be broken down into four areas:

Confused?
At a glance this image is slightly confusing, until you realize is very similar to the following, although with different goal and purpose: 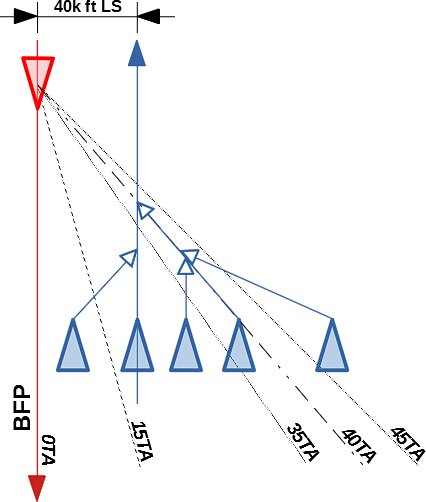 The four scenarios described above are dictated by the fact that the fighter can be anywhere on the bottom horizontal line (whereas in the modern discussion the fighter is already “on a side”), and therefore the amount of LS varies hugely depending on the scenario.

The calculation of the LS in this scenario is different from the usual formula as it is a prediction of the LS that the fighter will have at Lead range:

RNGLEAD is the Range at which Lead turn normally occurs. A couple of examples:

Also note that all TAs > 22 will equate to an LS that is equal to the TA.

To solve this situation, the fighter has to turn generating a Cut Into greater than Collision, in the direction of the BFP.

After assessing the situation and determining TA and LS, the fighter employs techniques of TA manipulation very similar to the ones already discussed; using known relations such as:

I don’t plan to cover those again, and if you are interested in the whole thing, I strongly recommend you to get a copy of the P-825/02.

Before wrapping it up, a brief review of the goals and the flow of these procedures:

The Fleet Conversion procedures remind very much the moderns techniques for Lateral Separation and Target Aspect manipulation already discussed. The most glaring difference is that the 2017 documentation does not mention the Fox-1 employment, and it is entirely focused on the stern conversion turn. I guess that there are at least two reasons for that:

That being said, these techniques are still critical as they help us to understand the factors that are involved in a missile employment and how the flow can evolve after the first employment (having a gameplan defined post “timeout” is critical!).
They are also still actual because in DCS, any time period or aircraft can be simulated: remember that the AIM-120 became operative quite recently (1991) and only after the major conflicts of the last century, and even after the end of the Cold War. This means that any F/A-18C and F-15C or other aircraft flying in any of those scenarios will be armed with AIM-9 and AIM-7.

As a final note, it would be interesting to understand if and how Lead Collision benefits the employment of AIM-120 and AIM-54: considering how powerful the rockets motor are compared to the AIM-7 and the fact that both can “loft” to extend their range, the impact is probably less pronounced, but I will try to answer the questions (for the Phoenix) as part of the new PK model once the mission guidance work is completed by Heatblur and Eagle Dynamics.