Before getting to the actual model and its considerations, a few words about some related topics.

Degrees of AoA and Units of AoA

We are familiar with what the AoA is (in case you are not, here is a quick link to Wikipedia) but the F-14’s Angle of Attack indicator works in Units of AoA.
In this model I am reporting both the Units of AoA and the Degrees of AoA (UAoA and °AoA from now on), the latter is taken from the bar displayed in the external views, along other information (RPM, Pitch, IAS, etc).
I haven’t found many sources describing the relation between UAoA and °AoA, then I run into this Jabbers‘ comment (source):

In the following example, the °AoA reported by DCS is 3.2°; the UAoA provided by DCS-BIOS is 6.82 and the UAoA calculated by means of the formula above is 7.53.
This is the in-game AoA Indicator:

The fact that the °AoA values do not come from the avionics itself may explain why they do not match the equation. That being said, whenever you find a UAoA value in this model, it comes from DCS-BIOS.

The UAoA is a very important indicator because, according to the manual:

This model can show if the conditions for optimal cruise match, depending on the payload, DI and so on.

In order to make my life easier, the data-gathering faster and more precise, I added a couple more features to my DCS-BIOS TFT, namely the AoA but also the Inner and Outer needles. The raw values are a good means to understand if the speed is constant or changing. These makes the reading more precise and much faster.
On top of that, these values eliminate the parallax error, a problem familiar to anyone used to analogue measuring tools.

Before collecting all the values I needed, I decided to test how reliable my modus operandi is. I decided to work at an altitude of 20,000ft.
I gathered the values in three ways:

NOTE: I haven’t collected all these values in one go, but for the majority of times, a wind from W, speed 003 was reported in the F-14 display. The aircraft heading is 291°. Odd since I didn’t set any wind in the mission.

°AoA, Pitch and RPM are taken from the F2 view. I am not sure if Pitch and RPM have a purpose in this model but better have more data than less, isn’t it?

The UAoA from the in-cockpit AoA Indicator is obtained by means of DCS-BIOS.

This is the ratio between UAoA and °AoA.

The values look very consistent, especially at lower speeds. At higher speeds instead, a movement of the throttle in the order of a few tenths of millimetres can swing hundreds of lbs/h. There is only one, very visible difference at 325kts.

The series 20000 D2 is an attempt to check why, at 325kts, one of the values spikes in such way. Flying with the stick hidden I didn’t notice it in the beginning, but eventually I saw it quickly moving from a heavily forward-trimmed position to neutral. I did some other tests and finally I pictured the behaviour of the trimmer by means of the Controls Indicator.

I plotted the values of TRIM, UAoA and the Fuel Flow: 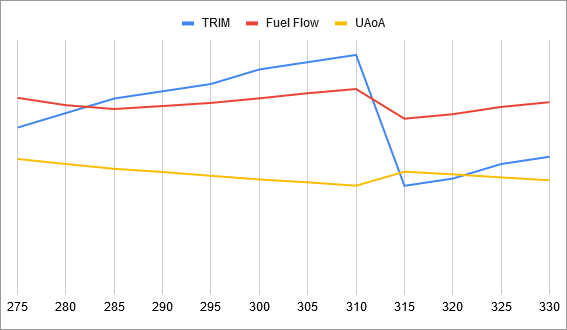 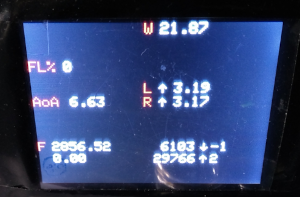 I decided to go deeper into the problem (some of you Pilots may have already understood what’s going on here) so I expanded my TFT again to check Wing Sweep, Left and Right Stabilizers, Manoeuvring Flaps and Slats.

I spawned at GS 350kts, reached 560kts then went back to 340kts and slowly finished at 250kts.
The following is the resulting table, reordered by GS:

The following is the chart of the Fuel Flow. It is consistent with the previous tests, yet it is much more detailed.

NOTE: The difference between the Left and Right stabs is probably due to the mentioned wind reported on the HSD.

Do the effect of the manoeuvring flaps affect the model? No, in my opinion. Since the goal of the model is providing a reference consumption value and the amount of parameters that affect the fuel usage are so many, such difference is quite marginal. 300lbs/h per engine = 600lbs per hour considering both the F110-GE-400.
Moreover, I can use the results from other tests whenever I run into this “trim-oddity”, using the most frequent occurrence of the data.
Finally, a mission is hardly flown by means of constant Alt AP and therefore the aircraft is handled by the pilot. He can adjust the parameters to optimize the endurance, if necessary.

That being said, if you are flying at constant speed and notice a high UAoA and high fuel consumption, try playing with the trim and power settings a little. You may improve your fuel endurance.

Now that the model is completed for the altitude of 20,000ft, the last test consists in departing from the ground (I did it hot from the runway), get to 20,000ft and accelerate and decelerate to certain speeds and see what happens. If the values match (a certain tolerance must be taken into account) the data previously collected, then it means that the modus operandi works, the model is consistent and I can proceed and apply the same methodology to different loadouts and DI.


The following chart shows the comparison between the manually gathered values and the model. The values haven’t been adjusted for the altitude, and the “No AP” data were collected without using any Autopilot, therefore they may be not entirely correct since it is hard to keep a non-FBW perfectly level at a defined speed. 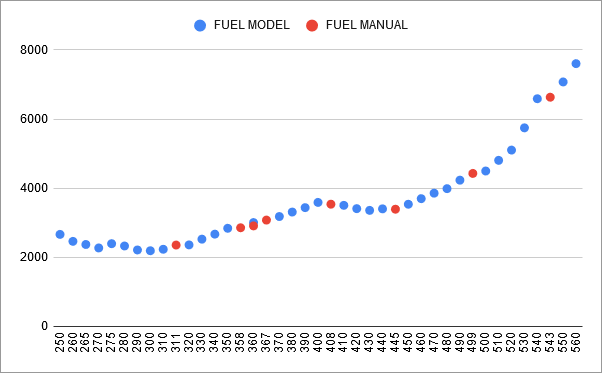 Out of curiosity, I also gathered some data whilst the wing sweep lever was manually set to 20° and 68°. These are the results:

And here are a couple charts to better understand the behaviour:

As expected, the Wing sweep 20° (WS20°) matches closely the Auto Sweep until the GS gets above Mach .70. At that point, the wings create so much drag that the performance crumbles. The Wing sweep 68° (WS68°) instead is suboptimal at low speed but it gets better as the speed increases. Eventually, I assume it overlaps the Auto sweep performance curve.
The Units of AoA are more interesting as they show the automatic manoeuvring flaps toggled at three different moments.

The next part will get into the details of the model, starting with the same loadout used in these tests (CAP).